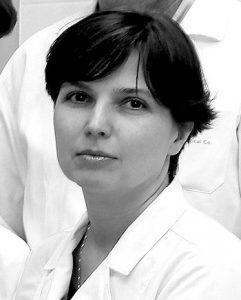 Loss of heterozygosity (LOH) in patients’ tumor DNA is not included in the standard list of tests, and it’s mostly detected accidentally during chimerism (presence of genetically different donor cells) monitoring by STR loci analysis in patients after bone marrow transplantation during relapse of the disease. Our pilot studies demonstrated that LOH is more frequently present in patients with relapsed and multiply relapsed acute lymphoblastic leukemia (ALL), than in patients with other hematologic malignancies, and it’s detected in the same STR loci during relapse as it had been during the initial disease – these results were demonstrated in the DNA analysis from archived patients’ samples. It is important to note that frequently LOH emerges in normal tumor karyotype as detected by the standard cytogenetic method. Using chromosomal microarray (CMA), we demonstrated that these tumor cells with normal karyotype carry uniparental disomy (UPD) of the whole arm or the whole chromosome. According to Knudson’s hypothesis, oncogenic properties of somatic mutations may appear as the result of the mutational transition to hemizygote or homozygote form. UPD leads to the loss of the wild-type allele, as well as the duplication of mutant alleles with possible oncogenic potential.

We plan to conduct a comparative analysis of STR profiles of tumor and normal cells DNA in a cohort of 100 patients with de novo diagnosed ALL, who undergo treatment according to the randomized ALL-2016 protocol at the National Medical Research Center of Hematology (Moscow, Russia). In patients with detected LOH and normal tumor karyotype, CMA will be performed to confirm UPD and to define the regions of LOH and affected genes. Based on the previously obtained data, we expect that 15-20 patients with LOH may be found throughout the cohort. In this group, using CMA we’ll identify genetic aberrations and genes involved in the regions of uniparental disomy, deletions, and duplications. The correlation of clinical parameters with genetic aberrations will be confirmed using multivariate statistical analysis.

According to the obtained data, clinical recommendations for LOH testing in de novo ALL for patients’ stratification into risk groups will be developed. Based on the new criteria for the patients with LOH adequate treatment will be proposed, which includes allogeneic hematopoietic stem cells transplantation, or modern innovative treatment approaches. The implementation of this project may further contribute to significant improvement of treatment results of de novo ALL patients, who are most frequently young patients (median age of ALL morbidity is 30-35 years old).